I’ve been hyped for My Friend Pedro: Blood Bullets Bananas before I even knew that was its name. I saw a gif on Twitter of this dual-wielding character kicking a frying pan into the air and shooting bullets off it to kill two guys behind cover. I was sold. I followed the mysterious Dead Toast Entertainment (@deadtoast_com) responsible for this glorious gif and got more and more awesome gifs over the following months. I reached out and asked for an interview which I was graciously given and that’s when I learned there was but one man behind this game: Victor Agren.

Victor’s been hard at work on this passion project for years and that hard work is showing through all the excited replies to the gifs he tweets from people like me and thousands of others. Most recently he’s announced that the game is being published by Devolver Digital, the madhouse publisher behind indie hits like Hotline Miami, Enter the Gungeon, Downwell and countless other gems. Everything’s coming up Dead Toast and the only question I had left after seeing how amazing it looked and learning my favourite publisher has backed it was simple: how does it play?

At Gamescom 2017 I was lucky enough to stop by the Swedish Games Booth (not the Swiss Games Booth, Stephan you idiot) and not only meet Victor in person but play some early levels of My Friend Pedro: Blood Bullets Bananas for myself. And let me tell you, this game plays like the drug-induced combo action of Hotline Miami had a glorious baby with the best scenes from The Matrix. It’s a 2D side-scrolling arcade game where players build combos and their score through quick and crazy kills just like the one in that first gif. By the end of my brief 20-minute demo, I was doing backflips off walls killing multiple enemies in slow-motion while sticking the landing on a barrel and spinning into a tornado of death. It fucking ruled.

Myself and Victor at the Swedish Games Booth during Gamescom 2017.

The introduction has this floating, dead-faced banana named Pedro telling the player all the various ways they can murder. Pedro is the only other main character of note besides the nameless, masked character whom the player controls. Pedro is genuinely hilarious, dropping one-liners from offscreen as the player gets bigger combos and peppering the levels with short, one-sided conversations that had me wondering more and more as I played what Pedro’s deal was and whether he was helping me or, in some twisted way, maybe I was helping him.

Victor hinted that Pedro’s immoral advice might play a bigger part in the game’s narrative, but he was hesitant to say any more than that. I was sold on the gameplay alone, but the idea that there may be a deeper, darker story to be uncovered in this game will definitely motivate me to pay much closer attention to the hapless banana popping onto my screen.

The earlier levels of my demo were the furthest in development and, although very early, I was very impressed. As one level started the sunrise peeked over the background, revealing smudges on the screen like this was all being filmed on someone’s camcorder, which fit the punk skateboarder feel of the main character so well.

Vibrant neon and pinks in the background signage complimented the more monochromatic foreground of dirty alleys and grungy kitchens. The first section of the game is a maze of alleys and filthy big city kitchens littered with the henchmen of The Butcher, the first of several bosses. I moved through the alleys and hallways taking out the henchmen from below and above, even from upside down in the air. Enemies exploded in a Tarantino-worthy fountain of blood as they toppled to the floor. My Friend Pedro is already a joy to view and Victor insisted that it’s still early, so I can’t imagine how great it will look after further development.

My Friend Pedro: Blood Bullets Bananas slows down what I’ve gotten used to doing so quickly in other action games and gives me the feeling I’m planning out my kills. Whereas in other action games like Hotline Miami I feel like I run into a room, die and then run back in now knowing where the enemy is, in Blood Bullets Bananas there’s a bullet time that allows me to barge into a room, slow down the game to have enough time to find the enemies and pinpoint each one. This added time also allows the player to find clever ways to take out enemies like while riding a barrel or backflipping off a wall.

I'm heading to #gamescom!
If you are too, you could watch this silly trailer in it's entirety.
Who could say no to that?#screenshotsaturday pic.twitter.com/OzoUfWefSb

These numerous ways to kills enemies add a layer of thought that will allow players who want to get the coolest looking killing spree to really explore the space. Players are encouraged to find the best ways to chain together kills without slowing down or losing focus, adding to a score multiplier the longer they get quick kills in succession. My favourite way to kill is the split kill, where using the right and left mouse clicks the player can target two different enemies on screen and shoot at the same time using the masked skater’s dual weapons. At one point I had two enemies target and as I dove off the upper floor I shot them both in the head as I fell in slow motion. It felt sublime.

This moment had nothing on what Victor showed me. After my demo, he showed me his playthrough of a level and I truly saw the potential of Blood Bullets Bananas. Victor’s mastery of backflips, barrel rolls, slow down split kills and bullet tornados to finish everyone off was an absolute joy to watch. I really feel like the desire to master the game’s combat is what will keep me playing long after I’ve beaten the story. Victor told me Blood Bullets Bananas is on track to have over 40 levels with boss fights mixed in between. Boss fights and some more zany looking levels that might be a part of Pedro’s dreams (nightmares?) will mix up the levels of Blood Bullets Bananas. 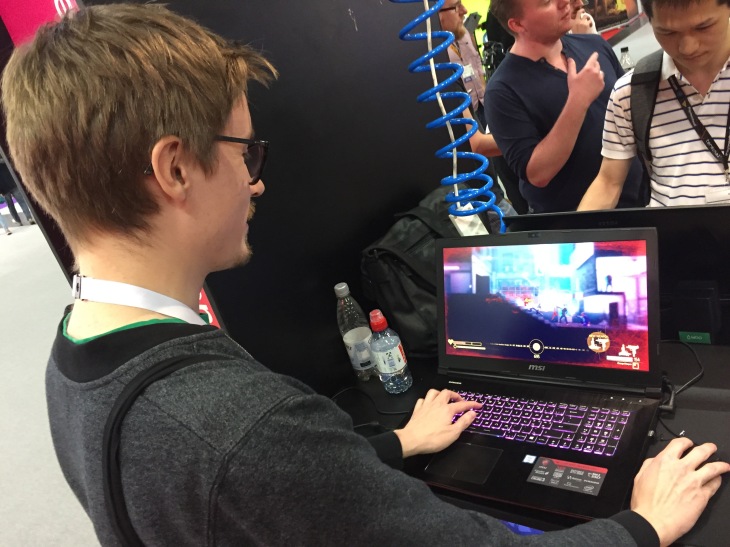 Who would’ve thought the guy who made it would be so good at it?

My Friend Pedro: Blood Bullets Bananas is shaping up to be one hell of a game. Making great use of its 2D perspective the side-scrolling world is dark and beautiful. I loved the way Pedro reacted to my kills, reassuring me that what I was doing was as bad ass as it felt. And boy did it feel bad ass. This game is dripping with style and with more love and polish I feel like it can be something really special. I cannot wait to dig into My Friend Pedro: Blood Bullets Bananas when it launches on PC hopefully sometime soon!