As with most of the awesome game designers I interview, I first saw Victor Agren’s work on Twitter. At the time, I didn’t know his name- his Twitter was simply “DeadToast” which piqued my interest almost as much as his game did. The first clip I saw was from his upcoming side-scrolling action game My Friend Pedro: Blood Bullets Bananas and, well, take a look:

Pretty sick right? I followed instantly and have been excitedly keeping up with the game’s development ever since. There’s a special vibe I get from this clip and the ones posted since that makes me feel like this game is going to be something special or, at the very least, hella fun.

I wanted to learn more about the talent behind it and that’s when I discovered Victor. Upon learning that he previously worked for Media Molecule on LittleBigPlanet AND Tearaway I was even more excited- those are two of my favourite games. And while My Friend Pedro: Blood Bullets Bananas definitely looks like a different game than those two, I’m still that much more confident in the game’s potential knowing Victor’s experience. So I chatted with the creator himself about his career, working abroad, indie development and his hopes for My Friend Pedro: Blood Bullets Bananas.

[Victor] When it comes to video games it was love at first sight for me. My earliest gaming memories are from the Sega Master System me and my brother shared. At first I don’t even think I considered that video games had to be created. They just felt like little worlds that always existed which you could jump in to, I suppose. It wasn’t until a little bit later, when we got our first PC, I got in contact with Klik & Play. I remember my father reading out the options that appeared when you started the application, which were “Play a game” or “Create a game.” I think this was the moment that changed my life forever. Suddenly it dawned on me that games could actually be created. I’m not exactly sure, but I might have been around 7 years old or so at this point. From that point on I just kind of followed my passion, and never really thought of it as pursuing a career in games or anything like that. I just started making games because it’s really good fun.

[Stephan] What experience did you have with game development when you got hired by Media Molecule?

[Victor] So continuing the story, after playing around with Klik & Play (and eventually The Games Factory and Click & Create) for a few years I got sidetracked into making little silly films with my brother and friends. At the same time I started picking up Flash and was figuring out how to do some animations. I think I might have been around 15 or 16 when I got curious about making games again. I remember spending a weekend trying to wrap my head around ActionScript in Flash. Over that first weekend of scripting I managed to get a little character running across the screen.

From there I kept on experimenting and learning from whatever tutorials and documentation I could find online. A few years later I had made a few small games and released them on Newgrounds and other Flash game portals. While this was going on 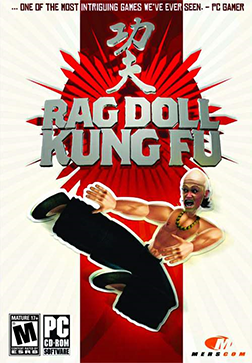 I participated in a small contest on the game’s forum which allowed people to submit “skins,” or characters, for the game. I probably made about 30 different skins, since I really wanted to win a copy of the game (I was too young to have a credit card, so I saw this as my only option to get my hands on the game). So while frantically submitting skins I got chatting to Mark and he offered me to Beta test Rag Doll Kung Fu. I did and time went on.

[Stephan] What was your role(s) while you worked at Media Molecule?

[Victor] My main focus was on Level Design.

[Stephan] What’s one of your favourite memories of your time at Media Molecule?

[Victor] What I end up thinking back to are the people. The people I met during my time there almost felt like a second family to me. I learned so much from everyone and I am immensely grateful for having had the opportunity to spend time around them. Working together towards a common goal creates a special bond, I think.

[Stephan] Why did you decide to leave Media Molecule and pursue full-time indie development?

[Victor] When I left I had been at Mm for about 6 years, I think. I had an “indie-itch” but the main trigger was something else. I met my girlfriend during my time in England. She’s from Brazil and was staying in England on a student visa. Her visa expired and she wasn’t allowed to stay in England anymore. So I decided to pack my bags and put on my adventure-socks and follow her to Brazil. Media Molecule was very supportive and totally understood. Later on, after returning to Sweden from Brazil, I was doing a bit of contract work for Mm for a while to help fund my indie endeavors.

[Victor] I can’t even remember at this point. I needed some sort of name to release my Flash games under back in the day. Come to think about it, what I might have actually meant was “Dead Meat”…

[Stephan] Why’d you decide to move to Brazil and what’d you learn during your time there?

[Victor] Like I mentioned before my girlfriend is from Brazil. During my time there I was developing the game “Nunchuck Charlie: A Love Story.” I was trying to stay disciplined and focus on working, mainly. I did get to see quite a bit of the country as well, though. I think my main takeaway from my time over there was how different the world can be and it really expanded my perspective on a lot of things.

[Stephan] What’s the game dev scene like in Brazil?

[Victor] I was staying in Rio De Janeiro, which as far as I could tell didn’t seem to have a very big dev scene going on. Seems like the action is in Sao Paulo. Also I probably didn’t do enough effort in trying to find other devs in the area. When I’m in work-mode I like to hunker down and forget about the rest of the world.

[Stephan] How long did it take to develop the original My Friend Pedro?

[Victor] That’s actually a very hard question to answer. I started working on the game over 10 years ago, as my final project in college. After joining Mm the game was put on ice for a long time. This whole time the game was always in the back of my mind and I felt I really had to release it at some point. It wasn’t until I finished “Nunchuck Charlie: A Love Story” I decided to spend a month or so to finish it up. Originally the game was supposed to be called “Blacklist” and didn’t have any floating bananas in it. But during the time the game was on hold the game “Splinter Cell: Blacklist” had been released, and there was a TV-series named The Blacklist, so it seemed to make sense to change the name. Also in order for me to get interested in the game again I had to find some new direction for the game, focusing on something a bit more bizarre and humorous. And that’s how Pedro, the banana, was born.

[Stephan] Did you consider launching a crowdfunding campaign for My Friend Pedro: Blood Bullets Bananas or looking at any other means of support/publishing?

[Victor] The development has mainly been funded by savings and noodles. If I keep living on the cheap, this should allow me to carry on without too much worry. Doing any form of crowdfunding would take too much time and energy.

[Stephan] Blood Bullets Bananas absolutely looks like the kind of game Adult Swim or Devolver Digital would publish, are you currently looking for publishers?

[Victor] Well! Funny you would say that. The original Flash game was sponsored by Adult Swim. And this new one, Blood Bullets Bananas, is actually being published by Devolver Digital.

[Stephan] What are your goals with Blood Bullets Bananas, in regards to improvements over the original, new features, length, etc.?

[Victor] Oh so much. The original was very simple and short. But it did however prove that people could get their heads around the slow motion and air-flipping mechanic. Those are the two main things that carried over from the original, mechanics-wise. The original one was about 15 minutes long. It’s still a bit hard to say, but I think this new one is about 4-5 hours of gameplay, packed with new features. My favorites are the dual gun split-aim and the dodging maneuver. A lot of work has also gone in to interactions with the world. Currently there are around 40 levels in the game. I try to introduce something new in the majority of the levels.

[Stephan] You’ve said Blood Bullets Bananas is inspired by things like Max Payne and The Matrix, are there any other pieces of media in recent years you’ve drawn inspiration from? The frying pan clip you’ve shared reminds me of a scene in the movie American Ultra and the whole game kind of gives me a 2D SUPERHOT vibe, are either of these inspirations?

[Victor] For a long time I had the mentality of if I’d seen someone doing something before I wouldn’t allow myself to do that thing. I’m loosening up a lot from that now, actually, allowing myself to get inspired from various places, but still really trying to bring the inspiration into a new light or different context as much as possible. Funnily enough I wasn’t conscious I was inspired by American Ultra when it came to the frying pan. I had probably seen the trailer a few months before doing that feature and once I released the GIF everyone kept commenting “American Ultra”. I watched the film and realized I must have picked it up from there. But yes, a lot of films have inspired me. I’ve spent quite a bit of time looking at clips from Bollywood films on YouTube. Some of that stuff is just insane.

[Victor] Not sure, really. I can’t really imagine my life turning out any better than it has so far. If I would have approached things differently back then maybe things wouldn’t have panned out the way it did. But if I was to give advice to anyone wanting to get in to making games, or making anything for that matter, it’s to start small and simple. And realize the joy of learning new things. There’s always a steep upwards slope when learning something new, but in the big picture that slope is really really short and once you get over the initial hurdle things start becoming fun. And accept that most things take time.

[Stephan] When can we get our hands on Blood Bullets Bananas and do you have an idea of what platforms you hope to release on?

[Victor] “When it’s ready” is the official word at this point. PC is the focus right now, hopefully including Mac and Linux.

Thanks for reading! If you’re interested in Victor’s work and keeping up with Blood Bullets Bananas‘ development you should follow him on Twitter @deadtoast_com. If you liked this interview you can catch me on Twitter @StephanReilly.